Since the early 90s we have bred Rare Breed, Middle White pigs.

The pigs are docile, friendly pigs that produce the most fantastic tasting pork with unbeatable crackling. We acquired our first two by chance and, as they say, have never looked back.

There was the odd blip in the early days; Bess decided that for the first 48 hours after giving birth she simply did not recognise the strange pink things snuffling around and tried her hardest to get rid of them. We were wise to this the second time round but unbelievably our cunning plan of a bottle of single malt had absolutely no effect so Hugh had to temporarily move in. After those first two days she became a very proud protective mother. We haven’t had a pig like her since. 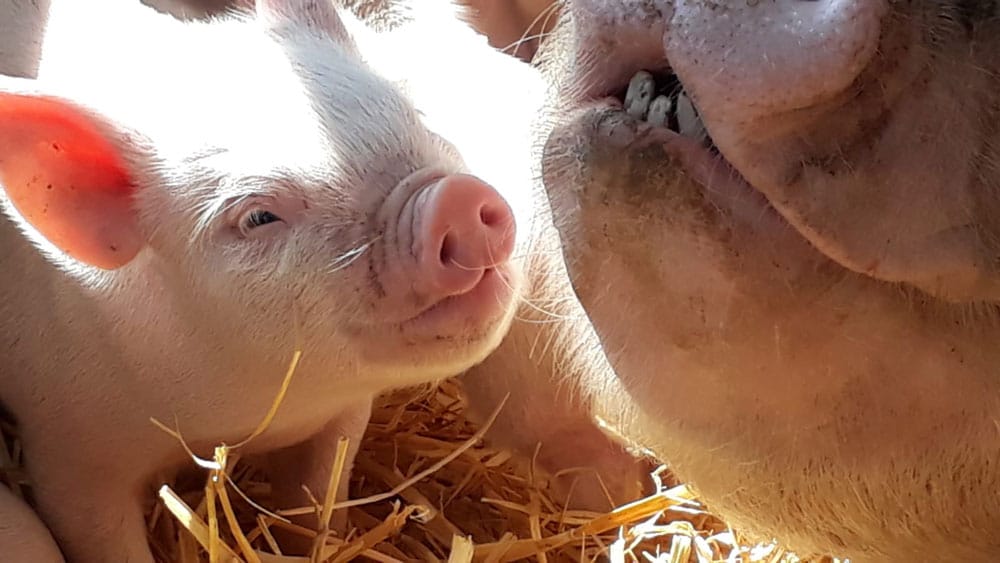 Our farrowing and rearing routine alters with the season and weather conditions. Experience has taught us that little Middle Whites do not like cold or too much mud. Generally the dry sows (those not feeding a litter) and boars live outside in woodland. Sometimes the sows farrow (give birth) outside- left to their own devices they can build the most fantastic nests of sticks, dry leaves and grass- or in straw filled pens. We keep the litters in family groups where they feel more secure and content. They are weaned at about eight weeks when mum is usually fed up of them anyway and they are ready to go by 6-7 months. We grow the majority of their feed with any extra cereal being bought in from a local farm.

The pigs are not given routine antibiotics, growth promoters or any GM feed.