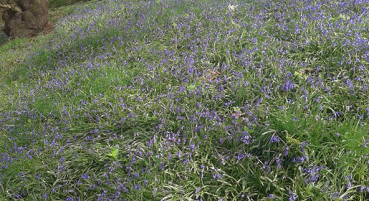 The bluebells are out and the grass is growing so ideally everything should be outside munching happily. Unfortunately there is a “mob” – yes that is the only word to describe them- of lambs in the field next to the house that bleet incessantly ever hopeful of a bottle of milk.

They aren’t orphans but just those requiring a helping hand or rather their mum’s do. We had a bumper crop of lambs with a quarter of the ewes having triplets and even two sets of quads. Some of them were adopted onto ewes with singles , some are happily raising triplets in the flock but the mob are the offspring of the younger or older mums who don’t have quite enough milk and being a softy I think the lambs are more content with a mum to snuggle up to at night. Finally they are down to two feeds a day and starting to consume vast quantities of pellets so in the next few weeks they should be weaned and I will regain a bit of freedom. Noise levels should also diminish as they realise the milk bar has closed. Fingers crossed.