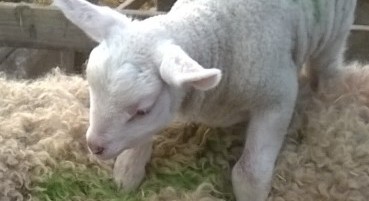 At approximately 1am this morning we finished the first batch of lambing. A bit of a warm up for the real deal in April, I celebrated with a steaming cup of coffee in the company of the dogs then had a good rest of the nights sleep safe in the knowledge nothing could possibly be in trouble lambing….Ahhh!

The little fella in the picture tends to sleep on his mum’s back then gets rudely awoken when she stands up.

It was going to be a photo of Lincoln, our “pig swap” but he seems to be out and about patrolling his new patch whenever I have a camera. We have swapped a boar we bred, for Lincoln who I think I’m right in saying won the Champion of Champions at the Yorkshire show. Now you might be thinking we won in that deal but our boar was gorgeous and it means the family he’s gone to get a pig from the bloodline they started their herd with, so they’re happy. We get new blood in our herd but at home he was either brother or father of all the sows meaning no mates so in a couple of days when we introduce him to a lady friend Lincoln should be over the moon too. Photo to follow.

Maddie the gilt (young female not had a litter) we bought in October has had a litter of seven. A perfect size for a new mum and what a star she has turned out to be. Took to it like a duck to water as they say.

Finally I hope everyone enjoys the Middle White supper club at the Tyneside Cinema Bar Cafe, have a great evening.