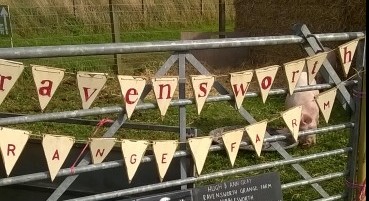 It’s nearly time to turn the tups out again and thus start a whole new year in the sheep cycle. We’ve bought a couple of new boys and some good mule gimmers ( females who have been shorn once but not lambed yet) so we’re all stocked and ready to go. Checked the dates to make sure school and college holidays coincide so they’ll be plenty of helping hands so now the tups just need there raddle on and they’ll be off.

Raddle is a sticky paint you put on the ram in between his front legs so when he has served a ewe he’ll leave a mark to let us know she has come into season and is hopefully now pregnant. We reapply the paint regularly then after 3 weeks change the colour as all the ewes will have cycled once and any marked with the second colour didn’t hold first time. It will let us know the time period we expect the ewe to lamb in and also highlight any problems wih fertility.

On the pig front we’ve attended a chef convention at Vallum Farm which was good fun and the pigs certainly enjoyed their day out (see photo). It was really good to talk to chefs and cooks about the qualitites of the Middle whites and to have them show an interest and ask questions.

We also purchased a new gilt (female pig not had a litter), Maddie who is from the “Fairlady” bloodline. We put her with the “Sovereign” boar we bought from Holmfirth last December , Hopefully I’ll have news if it was a sucess in 3months, 3 weeks and 3 days. Yep, that’s a conveniently easy way to remember the gestation period of a sow!

Oh, and the bull is here. Jerusalem Degas, we’re calling him Jerry. He seems fairly well behaved so far.