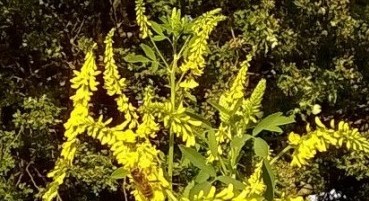 I do apologise for the time it has taken to update the news, lots has happened it’s just finding the time to sit at the computer since Archie has gone to Ag college. We are noticably a man down.

We did a little experiment last year and sowed a crop we’ve not used before, it was sweet clover which found it’s feet last year and then flew this summer. So much so that it reached 8ft, we grew it for it’s long tap roots which should break up any soil pan and improve soil structure and drainage. The surprise benefit was the number of flying insects it attracted, in the evening it felt like the whole patch was just alive with the hum of honey bees working, and not just from our hive, there were millions.

We have been busy buying and selling sheep, a trip to Kelso tup sales was an eye opener. Thousands of rams were sold for thousands of pounds, I had to queue over an hour just to pay and then there was a two hour queue for a tup taxi( yes, they are delivered to your trailer by quadbike). Buyers had come from all over the UK and I even saw vehicles with dutch plates. I bought a pedigree Border Leicester tup for our son’s ewe so then a few weeks later at Hexham we bought some older Scottish blackface ewes ( the ones with horns from the hills) just to give him a bit of work to do. From this match we are hoping to get a good crop of ewe lambs that will make suitable ewes for our own breeding flock……..will update after lambing.

A trip to feed the cattle two days ago revealed a surprise newborn calf to an oldish cow that we had presumed hadn’t held to the bull. When I checked the dates she must have been served the day last years bull went home, they are both doing well and will get a bit extra tlc to make sure she produces lots of milk to keep him growing through the winter.

JUST A REMINDER, NEWCASTLE CHRISTMAS FARMERS MARKET HAS BEEN CHANGED TO 16TH DEC. THERE WILL BE NO MARKET ON THE FIRST FRIDAY.